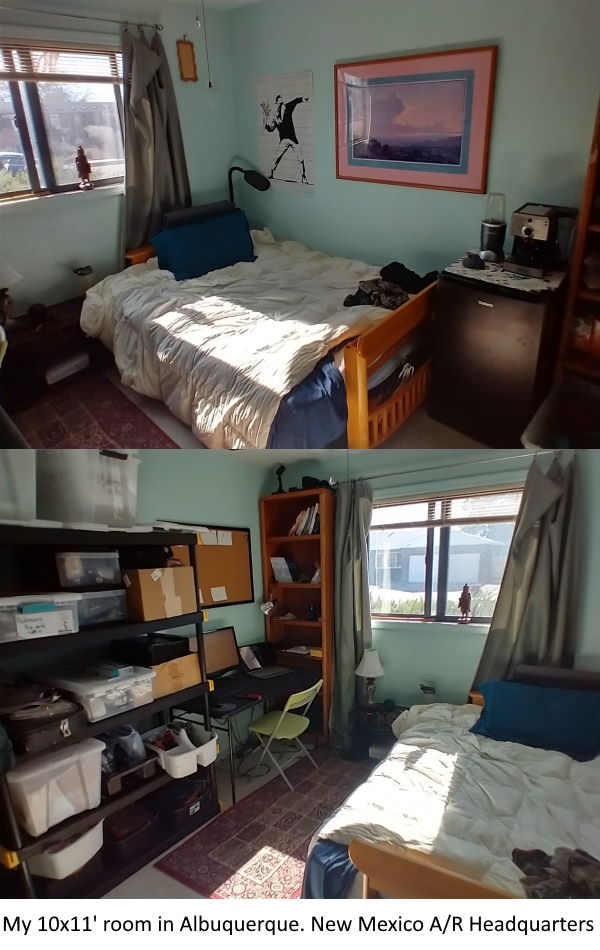 Big changes here: in an unexpected turn of events: the commune where I was planning on moving did not work out. I have settled down in Albuquerque, living and doing business out of a lovely 10×11′ room, with a very sweet older gentleman whom I am going into business with (recycled bicycles and ebikes). So far, it is “the match made in heaven”.

The last several months since leaving Wyoming have been a wild ride. It seems that the Goddess keeps on throwing me curve-balls, I catch them as best I can, adjust, leading to an outcome WAY better than originally planned. I have here the ideal living and working environment, and a diverse, culturally rich city of half a million to explore and build community in. Perfect climate, and I can go hiking or biking in the mountains 4 miles east of where I live. Yesterday I joined a gym which includes a kind of “tennis country club”. I am deliriously happy.

It’s been an emotional time for me, as I have been pretty much traveling and adventuring for the last 10 months, or even the last 10 years, depending on when you start counting. So much movement, so many explorations, so many problems to solve. Looking for a home, for a community, for fun and love and transformation. Much of those 10 years have been a hard time for me, a lonely time. I did write four books however, and deeply engaged the Authentic Relating movement. An engagement which is ongoing, and appears now to be my primary work for the rest of my life.

I don’t know what to think of it all. I AM pinching myself: it seems that I have found a home. Not necessarily my “forever home” (I may never have one). But a stable base to do my work of writing and building community, which is what I wanted. 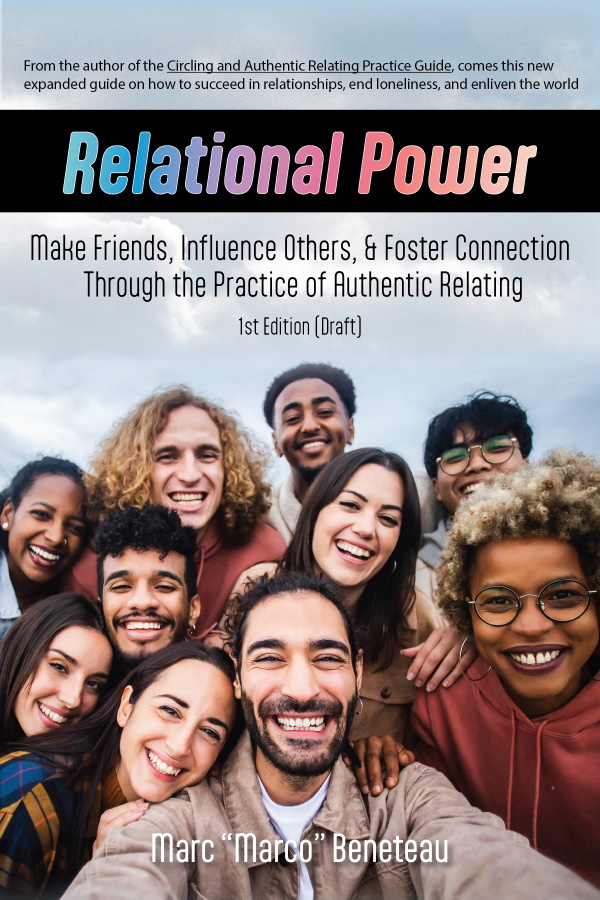 I only got settled here less than a month ago (moving is always complicated, plus I had to deal with the RV in Wyoming — it’s probably getting sold), But that month has been extraordinarily productive. I started (or expanded) 3 new groups, including a local group, all of which are going well. Most importantly — I was shocked by this — I completed Part 1 of my new book Relational Power, and published it to all channels (web, kindle, and paperback).

The decision to publish Relational Power incrementally (rather than go through the traditional book launch process, etc) had two motivations.

First, I want to “crowd-source” Parts 2 and 3, at minimal the editing and marketing of it, and hopefully also gather feedback and case stories. The book is vast in scope and I actually can’t write it from my perspective alone. If you are interested in helping out, or submitting reviews, please sign-up to my partners list. I will be in touch directly. Many thanks to Jeff S., by the way, who gave some extremely helpful (although pointed) comments to the early draft.

Second, I have realized (and finally surrendered) to the fact that it’s not possible for me to remain sane (take care of myself, behave rationally) when I am writing a book. The process becomes all-consuming, and I kind of just go unconscious in the creative flow. Self-care and somatic stabilization is becoming a priority — maybe THE single greatest priority this coming year. More about this below. So I thought it best to wrap up the initial stage of the book.

3. Broke, Single, Crazy and Old: The Redemption of a Sex and Love Addict 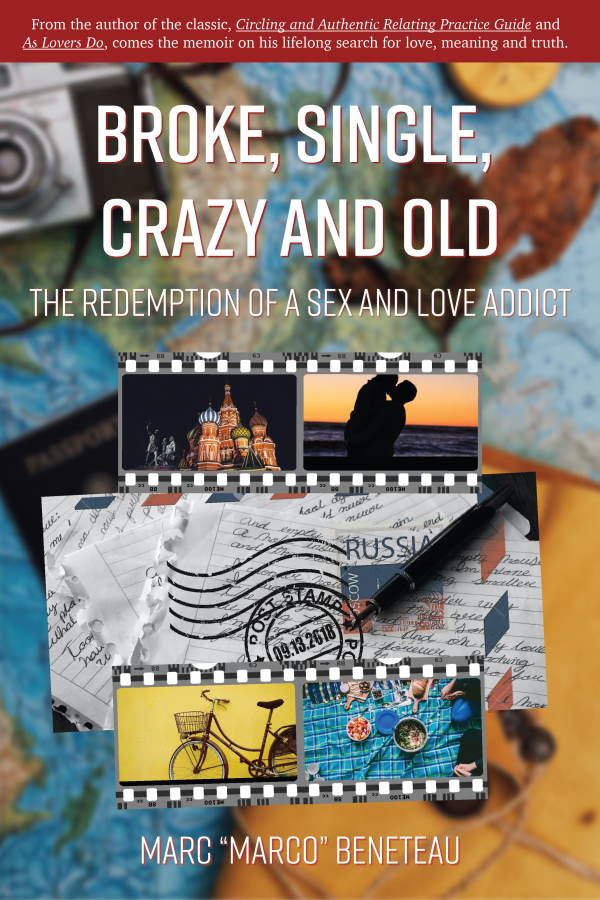 I had already published my memoir, Broke, Single, Crazy and Old), last summer in Kindle and Audiobook. I was thinking then that I would go the traditional book launch route for the paperback. But now that Relational Power is out, the memoir is just a distraction.

The memoir is a super-fun book (if memoirs are you gig), it is still one of my favorites,  and it was also the first book I wrote (its been 20 years in the writing, and goes into great detail of a very early version of me). However, I want to focus on Relational Power, which has a lot more commercial potential, and also is my future.

Reflections on mindfulness, from Tara Brach

Through these turbulent times (which include traveling and manic book-writing — two of my favorite things in the world), I have found a calming and comforting resource: it’s Tara Brach’s True Refuge: Finding Peace and Freedom in Your Own Awakened. It’s very inspiring to me, a lot of it is autobiographical and it resonates very well with my work in relational intelligence. It particularly “hit the spot” for me in terms of my desire for somatic stabilization as my energy is actually quite low (aside from the occasional manic periods), and my nights are often uneasy or sleepless (or even tormented dreamscapes). The future is unclear as well, because it is obviously not enough to write a masterpiece on human relationships (LOL), I now have to get out and do the work:

Which “work” feels kind of overwhelming to me. Even so, it’s an excellent beginning, including one very good friend here in Albuquerque. His name is Gregor.

I had a very interesting thought on this topic from listening to Tara Brach: clearly, I am in a new stage of life. I am pretty much happy all the time, especially in the morning after the first cup of coffee 🙂 , and have been for many months. But is the real cause of this happiness the book, the thought or “story” that I am on my way, my writer’s career is launched, I am likely going to have a significant impact in the A/R community? Or something else altogether? In other words: how much “story” is there here and what is its real impact? Because an alternative story, and maybe a better one, would be that I am dropping into what Tara Brach calls “presence“. She also calls it “waking up from the trance“, and her book is filled with examples of people who have done that.

I wanted to share that thoughts, even though I am not certain of its value. Just that it feels comforting to me.